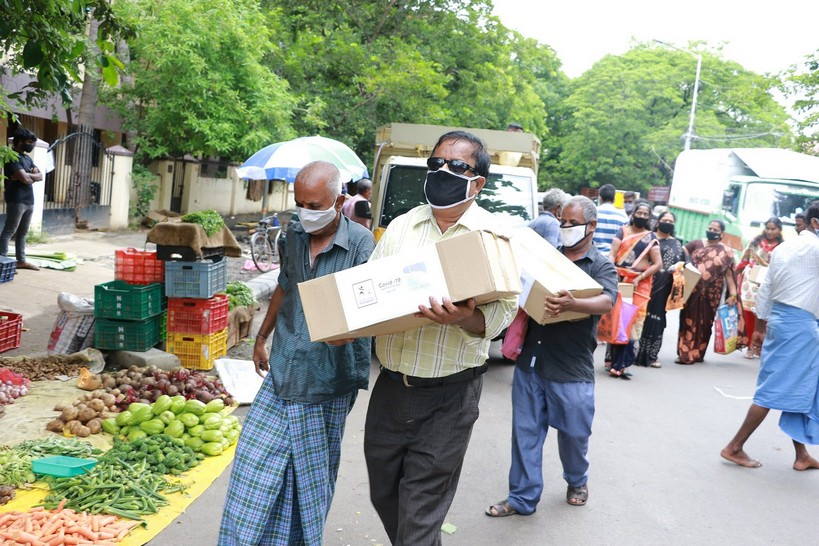 The nationwide lockdown has let alot of people agitated and blank, the crisis has made it difficult in obtaining basic needs amid lockdown. The vulnerable section of the community are the people with disabilities who were left in the lurch, however the extent of support at their disposal is very limited. People with disabilities have faced multiple challenges during the coronovirus-led lockdown.

We Dr. John Joseph foundation work towards society that view each person valuable and of importance. We were able to acquire donations and provide groceries with the help of our supporters and individual donors who had generously contributed towards our vision to reach out to the neglected.

We led a one week campaign on social media to help us reach out to the much needed community at the Indra Nagar, Adyar. We received great responses from supporters and individual donors for the same cause which helped us take it forward.

Today 12 August 2020 we took the initiative to distribute the groceries to the 50 differently-abled families who approached us at the streets of Indra Nagar community. We also had many of them come from different parts of the city.

Our guest Mr Sairam Ramaswamy the founder of the Ramu Lalita Trust along with Mrs. Sashi Santhosh who have been actively participating on social services in the city catering to the needs of children’s education and migrant population had also extended their contribution towards the cause, and helped with the distribution of the groceries directly to few of the families present at the event.

Speaking as a guest Mr. Sairam Ramasamy said ” He was happy to be a part of the contribution, he also mentioned he would be happy to take it forward in the future.

Listening to the testimonials of the families who received the groceries Mr. Ganesan aged 38 an auto driver of the kolathur arear effected by polio was very grateful to have received the groceries. He said ” It was too challenging to make ends meet as he was the only source of income. He also said that nobody reached out to help them during the lockdown and they even went without food at times”.

Echoing to similar testimonials another differently abled person named Aruna age 37 from Besant Nagar expressed her difficulty during the lockdown. She said that the immediate relief will make a difference for her and her family”.

Lakshman Narasiman 10 year old boy studying in the 6th standard who’s mother works on a monthly bases as catering supplier, father physically disabled after a stroke was going through time. Being deaf and dumb he was unable to communicate or understand the reason of the event. While receiving the provisions his smile showed his gratitude and he was very excited to receive toys and chocolates.

Later part of the event we were happy to co-ordinate with Mr. Rajini and Mrs. Mugila In welcoming Mr. E. Mariappan of the Thiruvanmiyur traffic Inspector of Police in the distribution of the remaining parcels to the rest of the families.

To our supporters:
Thank you so much for your most generous and continuous support. My deepest thanks to all our donors whom we are unable to list down. I am extremely thankful to all our volunteers who helped relentlessly in making this day a memorable one for the deserved people.